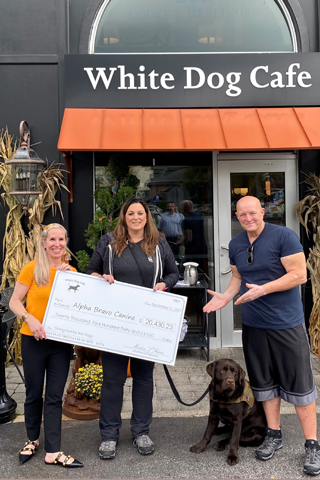 The White Dog Cafe and WMMR’s Steve Morrison presented a check for $20,430.23 that was raised at this year’s Fourth Dining Out for the Dogs for Alpha Bravo Canine, ™ Philadelphia’s first and only 501(c)3 organization that donates service dogs to US veterans suffering from debilitating medical and psychological problems as a result of their active combat duty. The event takes place each August and features on-air personalities from WMMR, BEN FM, WMGK, WXTU, and The Fanatic at each of the White Dog Cafe locations as well as a puppy kissing booth, raffles, a signature hot dog flight only available at Dining Out for the Dogs and more.

The average cost for a puppy to train is $30,000 depending on the disability. Alpha Bravo Canine does not charge veterans for the training or the dog. Over the past four years, the Dining Out for the Dogs events have raised over $100,000.